Bethenny Frankel sure does not let her figure go.

The 47-year-old TV star looked incredible in a small yellow and white bikini as she lounged outside in the sun.

This comes after she has put her personal business out there more than usual in the last few episodes of The Real Housewives Of New York City.

The Skinnygirl mogul showcased her figure in an Eberjey two-piece that easily brought attention to her long legs and toned stomach.

The top was strapless with a cut-out circle in the middle allowing the perfect amount of cleavage to be shown. 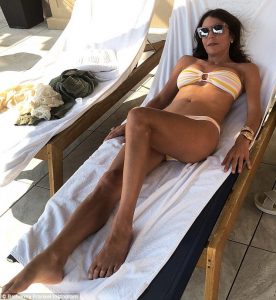 It was decorated with yellow and white stripes and perfectly matched the brunette beauty’s bottoms.

The mother-of-one rocked a handful of accessories, including a bulky gold watch, a matching bracelet and huge diamond ring.

A pair of gray cat-eye framed sunglasses were on her face.

The New York native wore no makeup but had a dainty gold necklace around her neck.

Her great fashion choices aside, it was Bethenny’s glow that shined the brightest on this hot and sunny New York day.

And she has plenty of reasons to be beaming.

The mother-of-one has cleverly used the fame and notoriety from her lead role on RHONY to turn herself into a brand.

Her lengthy resume includes writing books, starring in exercise videos, being a talk show host and creating the Skinnygirl cocktail and food company, which she later sold for a reported $100 million.