Take Kim, for example. It’s like every other day, she’s breaking out a brand new bikini in a whole different color. While on vacation with Kourt in Turks and Caicos, she posed in a red Chanel bikini (with the logo strategically on her bikini bottom) one day, before donning an orange two-piece on the next. She wore bikinis in hot pink, black and white on that vacation, and they all were hot. Kourt was just as hot during that trip, wearing her own multi-colored swimwear. 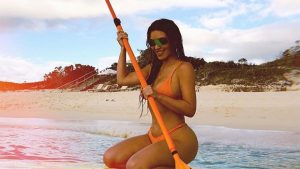 Both Kylie and Khloe gave birth this year, but leave it to these KarJenner women to get their bodies back into bikini shape in time for the summer. A month after giving birth, she posed in a black bikini, but later in the year (and when the weather was warmer) she went on vacation with her baby daddy, Travis Scott. While the bikinis weren’t as colorful as when Kim and Kourt took Turks and Caicos, Kylie still flaunted a figure that most would die for. As for Khloe, her body has definitely snapped back after giving birth to True Thompson, but unlike her sisters, she doesn’t really share a lot of snaps of her in a bikini.

So, when Kendall posted a picture of her older sister in an orange-yellow bikini at the start of July, per Us Weekly, it was a big deal. Khloe was lounging near the pool and looked phenomenal! However, Koko had to chime in about the shot. “I’m just seeing that Kendall posted a video of me in a bikini,” she tweeted on July 3. “Thank God she knows her angles LOL cuz I do not look like I did in that video LOL laying down is a game changer. I had an hour to hang with Kenny while True was napping.” Speaking of Kendall, she’s no stranger to sharing colorful bikini selfies, as well.