a new brand of women’s swimwear. Both elegant and bohemian, they are made in
Casablanca from fabrics imported from Italy. With a gypset spirit and well-
thought-out cuts, Khaven’s creations seduce by their sleek and glamorous style.

Khaven is a kind of acronym. It is the junction of the first letter of the first
name of the designer, Kenza, combined with the English word “haven” meaning “haven
of peace”. So it is, in a way, the paradise of Kenza that it reveals to the liking
of its collections.

Called “Casablanca”, the first collection of the brand, launched this year, is
inspired by the travels and meetings of the designer around the world. It is
composed of 4 sets bearing the names of Moroccan women (Aya, Alia, Yasmine,
Sophia), in various colors ranging from white to yellow, to nude, blue or black.

“After studying hotel management and a few months abroad (including an internship
in Chile and then a year in Australia), I wanted to return to Morocco, my native
country, to finally launch Khaven” Kenza at HuffPost Morocco.

“Having grown up between Morocco and France, I have always been as inspired by the
natural style of French women as by the femininity of Moroccan women, and I remain
very attached to Morocco, so the first collection was shot in Casablanca by the
young woman Talented photographer Yasmine Benkirane, “she says.

After the success of this first collection, Kenza is already working on that of the
next summer, which looks promising in color.

To afford one of these little wonders, it will still have to disburse between 700
and 1000 dirhams per set. Khaven Swimwear creations are available on the khavenswim
website, at the La Fabrique store in Casablanca, and at the boutique of the Four
Seasons Hotel in Marrakech. 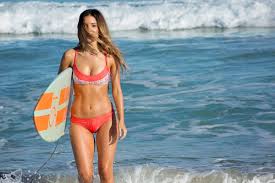