IT’S named after our most iconic beach, it’s made in Australia by Australian designers using Australian manufacturers, and yet this local success story is entirely built overseas.

Bondi Born, the three-year-old luxury swimwear brand founded by former Fairfax executive Dale McCarthy, has been making waves in the US and Europe and has even
graced the Instagram pages of stars including Beyonce, Miranda Kerr, Nicole Trunfio and Hailey Baldwin.

After a successful “test season” in Europe netted $500,000 in sales in its first year, the business is projected to hit $4 million this financial year, and is
stocked in retailers including Selfridges and Harrods in the UK, Oberpollinger and KaDeWe in Germany, the Four Seasons in Hawaii and Miinto in Scandinavia and Bikini.com in the US.

This year, for the first time, it will begin selling in Australia.

“Because I wanted to do a luxury brand with no compromise, made in Australia, it does make the product expensive,” Ms McCarthy said. “From my research in the
Australian market, there were only a handful of boutiques and certain department stores that sell swimwear at my price point.”

A typical Bondi Born piece ranges from $US150 ($190) to $US350 ($440), whereas a good-quality swimsuit at a typical Australian department store will retail at around
$100 to $200. But Ms McCarthy said there was a growing local market for premium swimwear.

“Camilla is sort of helping the industry realise that you can actually charge a reasonable amount of money and people will pay for quality,” she said. “I think it’s
also because the Australian market has been dominated by a handful of brands.

“You’d go to the beach, there would be half a dozen people wearing the same swimsuit. Whereas when I did my research in European department stores, there were a
lot of premium brands, but no Australian brands.”

While Bondi Born will never be as large as commercial brands like SeaFolly, Ms McCarthy said if she could “be in the best boutique in every Australian swim town or
resort and one of the major department stores” she would be happy.

Ms McCarthy, who spent 20 years in corporate life, was inspired to start her own business and “didn’t want to be 85 in my rocking chair looking back and feeling I
never gave it a go”.

“I wanted to create a beautiful brand,” she said.

“The way we evolved is we produced 12 ‘stories’, and each story has its own unique fabric and a variety of fashion-forward shapes, but we don’t just repeat the same
thing every season. What is consistent is innovative, luxury fabrics.”

Once she had the brand and positioning, it was about identifying the market.

“I wanted to start the business as a global business to address the largest
profitable market that I could,” she said.

“Because I worked in digital for so long, I know that your customers can be anywhere
in the world.

“For our first test, we basically had 1000 bikinis made, shipped them to a warehouse in the UK, then got on the phone and called a whole bunch of e-commerce sites and
said, ‘We’ve got this stock here, would you like it?’ Within six weeks we sold out. Then we said, ‘Okay, let’s do the same in America’.”

Ms McCarthy said having a global customer base and global cost base made managing currency fluctuations a “challenging part of the business”. She said OFX, formerly
OzForex, was a better alternative to the typical business bank account with one of the big four.

Michael Judge, head of corporate dealing at OFX, said the currency exchange provider was seeing an increasing number of smaller online retailers were expanding into
overseas trading. He said it was key for smaller retailers to develop a currency strategy that protects payments to overseas staff and suppliers.

“Businesses should consider hedging – guaranteeing a preferred exchange rate for up to 12 months,” he said. 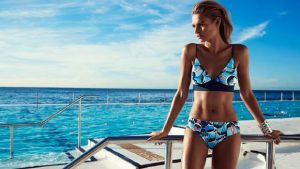