The TOWIE babe’s social media pages have become a hub of hotness in recent months, thanks to her sizzling hot selfies and barely-there bikini displays.

And blonde beauty Lauren Pope proved that less certainly is more yet again his week as she took to her official Instagram account to share a red-hot snap.

Giving off some serious Pamela Anderson vibes, the 35-year-old DJ and reality star flaunted her killer curves in a skin-tight eye-catching red swimsuit as she posed up a storm for the camera. 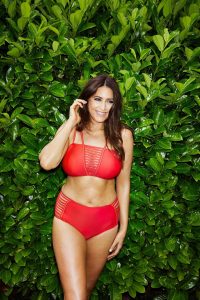 Flaunting her incredibly bronzed ban – no doubt down to her rigorous self-tanning routine – the stunning star sent temperatures soaring as teased fans in the extremely high-cut number which more than hinted at her nether regions.

But Lauren appeared to be oblivious to the jaw-dropping reveal, as she ran her hands through her hair and flashed a cheeky smile.

Ever the fashionista, the busty babe teamed the minuscule outfit with no less than three gold chains, each featuring a small pendant of a different design, while she rocked a pair of oversized dark shades.

She captioned the sizzling hot snap: “Keeping my standards high & my tan dark! My faves @bboldtan have code POPEY20 for 20% off their ENTIRE tanning range…Be quick! I use the Xtra Dark Mousse btw, swear by it! #bBold #Tan”

And fans of the bombshell quickly rushed to inundate her with compliments over the pic. 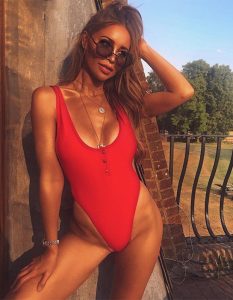 A second added: “I smell smoke, cause you’re fire. Damn!”

While a third said: “Yes my love, sexy like always, super sexy.”

And a fourth chimed: “Looking unbelievable.” 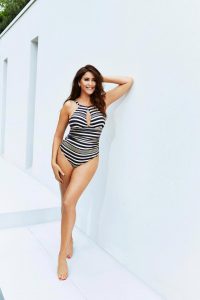 While a final wrote: “Oh yes, Baywatch is calling.”

Meanwhile Lauren has proved to be quite the businesswoman since appearing on our screens in TOWIE.

Along with owning her own brand of hair extensions, Hair Rehab London, she also travels the world DJing at some of the biggest celeb hot spots and has collaborated with Fashion houses Missy Empire and Misty the Label.