Making Lingerie for Every Body
The history of lingerie has long been one of form over function. From the classic corset, which calls to mind tight laces, restricted breathing, cracked ribs, and even rearrangement of the wearer’s internal organs, lingerie is an area of fashion where the adage beauty hurts seems to reign supreme. This is markedly at odds with the promise of lingerie in modern day advertising — that the sexiness one feels while wearing X-brand of (probably expensive) satin and lace creates the confidence needed to pursue one’s own pleasure.

Yet for clothing that is inextricably linked to sex — which, ideally, is all about experiencing and sharing pleasure in our bodies — lingerie is often created without the comfort of the wearer in mind. In fact, in an article for the LA Times as recently as 2013, one woman described her search for the perfect lingerie as thus: The tap pants were too small and cut off circulation in my thighs. I vaguely remember crying as I tried to squeeze into them.”

Not much of a confidence booster.

More recently, new brands of lingerie have begun to take this spotty history into account. In March 2016, Verily Mag ran a spotlight on lingerie brands that were trying to change the airbrushed and overtly sexual stereotype of the industry. Included in the roundup was Naja, a brand dedicated to positive body imagery, eco-consciousness, and providing opportunities for working single mothers; Dear Kate, which boasts the radical concept of women actually looking happy in their un-Photoshopped bodies; and Nubian Skin, which addresses the erasure of women of color in the lingerie industry, and offers lingerie in a different kind of nude, that is, not white.

These new perspectives on lingerie are undoubtedly refreshing and necessary, but there’s one boundary they haven’t yet crossed: gender. While strides have been made to make lingerie inclusive of every body type, they’re still restricted to cisgender women as consumers. One designer aims to change that. Carson Stern, the NYC-based creator of Pêche Lingerie, seeks to revolutionize the way we think about lingerie by designing intimate apparel for her, him, and them. Pêche defies expectations in terms of who gets to wear lingerie and feel sexy in it, breaking the traditional narratives around these garments.

When we spoke about the impetus behind Pêche, Stern talked about her own relationship to unrealistic standards of beauty. She described how she moved to New York City at 18 and quickly developed an eating disorder, influenced in part by the stress of being in a new place. As she healed from the eating disorder, Stern says, she became very naturally interested in lingerie as she pursued a career in fashion. Her early experiences with it, though, were similar to those of the women interviewed by the LA Times:

If I felt a bit bloated, I wouldn’t feel sexy in it, and wouldn’t want to wear it, Stern says. I love my body, but even now, mainstream brands of lingerie tend to make me feel worse about my body. We talked about how this was at odds with the promise of lingerie in advertising — selling confidence, albeit only to a very narrow scope of consumers. Skinny white women with their boobs pushed up, Stern jokes. That’s who most lingerie is for, but it’s not me or my style.

As a sex educator as well as a cis femme wearer of lingerie, this tension is something I encounter a lot, both professionally and personally. As an educator, I talk to colleagues and clients about how to keep the body — and physical experiences of sensuality and eroticism — at the forefront of our sexual lives. And in my personal life, I’ve written before about how an embodied sense of sexuality was — and in some ways, continues to be — a rocky journey.

In researching the history of lingerie, it’s not difficult to see where these competing raisons d’être come from. Lingerie has always been tied in some way to sex, but it has also been linked with the idea of performance. For example, take the practice of toilette in the French courts during the 1700s. Toilette is described as the morning ritual of dressing and undressing in front of the court — a performance that often lingered on the undergarments to emphasize the intimacy and eroticism of the moment.

It’s easy to make a connection between toilette and the performative aspect of lingerie — and since, historically, lingerie has been designed primarily with cisgender women in mind, one could also make the connection to the performative aspects that many women describe as being a part of their early sexuality. The ritual of toilette makes an object of the wearer: She is something to be gazed upon in a vulnerable — and therefore intimate — state of undress. Her subjective experience is absent from such a performance, however.

Peggy Orenstein, the author of Girls and Sex: Navigating the Complicated New Landscape, identifies this kind of objectification as something that happens to those who are socialized female long before they start wearing, or perhaps even expressing interest, in lingerie. In a rather disquieting introduction to her book, she writes, When little girls play at ‘sexy’ before they understand the word… they learn that sex is a performance rather than a felt experience.

An exacting interpretation of how to be femme spans centuries, and it is overwhelmingly related to restricting or reshaping the body. The s-curve corset, which came into popularity in the 1800s, accentuated the breasts, pushing them up and out, as well as the hips, and further created a manufactured standard of beauty that women were pressured to aspire to and work toward, but which was painstaking to achieve. Wealthy women were encouraged to shop for intricate and finely designed undergarments, putting as much consideration into them as they would their outer garments.

While ideal aesthetics do change over time, one thing that tends to remains constant is how inevitably elusive they are. In the early 20th century, for example, and then again in the 1960s, the ideal flipped from hourglass figures to the straight up-and-down boyish figures of flapper girls and hippies — yet these new paradigms didn’t lose any of the scrupulous effort it would take to achieve them. The sexually liberated braless look of the ‘60s meant that A- and B-cup bras made of thin, sheer fabric were in vogue at the time, making it difficult for larger-breasted women to find lingerie created with them in mind.

It goes almost without saying that lingerie was a realm of fashion almost exclusively for cisgender women who fit within whatever very narrow standards of beauty existed at the time. 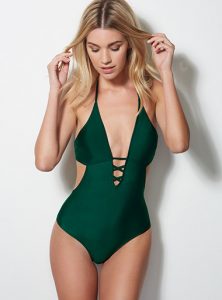 Stern used this as her jumping off point when developing Pêche. It came from a place of, ‘Why isn’t there something out there that offers what I value in lingerie?’ she told me. To Stern, lingerie is emotional, intimate; it brings the wearer to a sense of connection and communion with her own body, rather than a competition to fit into some idealized version of femininity that, for most, is unreachable.

I began to look at the body types typical of Renaissance art, Stern said, plumpness, and curves being embraced rather than restricted. She was also interested in body positivity for all genders, instead of just cisgender women, recalling that her many friends who were genderfluid, transgender, or nonbinary often felt erased when searching for intimate apparel, and chafing against the heteronormativity inherent in lingerie advertising.

I want to design lingerie that redefines beauty standards, Stern says. I imagine guys buying lingerie for their boyfriends, or girls for their girlfriends, or anything in between, rather than the narrative of a cis man buying expensive lingerie for his cis girlfriend, and molding her into an ideal that fits into the narrow standards of the male gaze.

We talked about what lingerie for him/her/them would look like, and for Stern, it meant focusing on sensuality and sensation rather than standards of beauty. Function, one might say, rather than form. Hearing her talk about this made me breathe a sigh of relief, because as a sex educator, I so often talk to friends and clients about this feeling of being disconnected from our bodies — which is a strange state to be in, and certainly unhelpful, to say the least, when it comes to the fundamental physicality inherent in the act of sex.

Stern described Pêche’s first collection as Grecian and comprised of well-made silks that sit well on all types of bodies. She waxed poetic as she described the collection: Each piece can work for a different kind of person. For example, pants. Or a top that is good for bigger breasts. Grecian dresses or draping gowns. Exposed, see-through — but some pieces you can also wear out. Others are for a special place for a special time. Looser fitting clothing that falls on the body in a really natural way that is beautiful. Renaissance art, the Botticelli Venus, cloth that hangs and drapes on the body naturally without restricting it. Methodically stitched and special and not mass produced. I want to completely redefine how we see — and experience — lingerie. Tellingly, the Birth of Venus painting attributed to Botticelli shows the goddess naked except for her hair, a picture of sensuality whose body is unrestricted by clasps, straps, or garters.

In terms of her drive to create a space for gender fluidity, she is also dedicated to that goal not only on behalf of her friends but also herself. I exhibit very strong masculinity in everyday life. But I’m very proud of my ‘feminine’ voluptuous body. I’m dedicated to creating a line that represents a range for people who don’t want it fit into the strictly masculine or strictly feminine. It’s important to note, however, that that range is something that, with Pêche, each individual consumer is able to determine for themselves — as opposed to, for example, the lingerie of the ‘80s, which was feminine in a very compulsory way, to compensate for the very masculine shoulder-pads-and-straight-lines-and-angles style of women’s fashion in that era.

And while access has always been a hard-to-ignore theme when it comes to the history of lingerie, it’s not one that has been lost on Stern. We’re a high-end line, no doubt, she says, especially as they start out small, with expensive fabrics and a relatively small base of followers. But the accessibility of lingerie is still important to her, as is the social change that inspired her to create the line. In an Instagram post in light of the recent election, for example, she encouraged fans to comment with their favorite charities that help propel America forward — especially those who help our most vulnerable populations (among which are transgender and gender-nonconforming people) as well as the environment.

I’m trying to appeal to everyone and redefine lingerie, Stern says. There is no set standard for what I’m doing — only a dedication to inclusivity, authenticity, and a way to bring people home to sensuality in their bodies again.